After the discussion she had with Kevin a week ago at the church, Stella was feeling a whole lot better and relieved now that she'd finally opened up to someone.

On more than three occasions Chikodi had called her but she was done with fake friends so there was no need picking her call. She even sent her a text saying that she had a pressing need and would love to come over.

"After all the lies she told Kevin so she has the mind to ask for my help!" Stella just couldn't understand how Chikodi sleeps at night with all the wicked things she'd done.

She had more things to think about than fake friends.

Deep inside her heart, Stella knew that she missed Kevin but there was nothing she could do at the moment. Even if he didn't say it, she knew it was over between them. No right-thinking man would marry a woman without a womb.

A text message vibrated her phone as she jerked back to reality.

It was from Kevin. She quickly unlocked her phone and opened the message with curiosity.

"Babe, I hope you're alright. You don't know how much I've missed you. Meet me at Golden Gardens Restaurant by 7.30pm."

"Hmm. So he'd finally decided to break up with me. Not surprised though. I saw it coming. I better not go and embarrass myself," she said as she tossed her phone on the bed.

Loneliness had become an integral part of her and she looked forward to the weekend as she had plans of going to see her family.

She missed home so much and now that she had no one to occupy her thoughts and fill her heart with love, the only option was to return home where she was sure of love that wouldn't judge her.

A knock at the door startled her and she realized her thoughts had overwhelmed her. 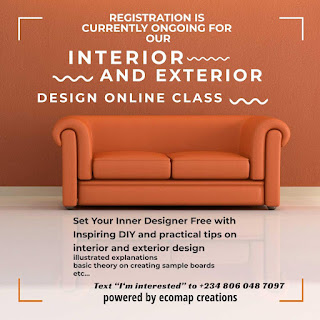 9 days more and the online training starts. Don't be left out. Becoming a professional interior designer is just a text away. Send your number to be added to the class now.

"Who could that be?" Stella thought since she wasn't expecting anyone.

"Hold on, I'm coming!" She called as she headed towards the door and peeped through the peephole.

Maybe her eyes were playing tricks on her. Stella looked again to be sure she was seeing correctly.

"But he just sent me a text? How did he get here so fast?" She whispered to herself.

"Babe, I heard your footsteps so I know you're at the door. If you don't mind please let me in,"

Kevin's words broke through her thoughts from the other side of the door.

Well, Stella was left with no other option so she complied.

"A hug won't be a bad idea you know," Kevin said after she'd opened the door to let him in.

As she let herself into his arms, she couldn't deny the fact that it felt so good to be held by him once again even if it was for the last time.

From the bottom of her heart, Stella knew she loved this guy, too bad she couldn't have him. Why he'd come to break up with her in her house was what she couldn't understand.

She would never let herself be vulnerable again. No way!

She'd better let him know straight up that he was not allowed to torment her just because he knew she was in love with him.

"Kevin, why are you doing this to me? Why put me through this pain afresh? I don't know why you have to rub it in my face. Yes, I know it's over. Please move on with your life and forget about me!" Stella couldn't even believe she'd said that.

"You think it's that easy? You have no idea what this past week has been for me. How do I let go of the only woman who has stolen my heart?"

"I'm sure you'll find someone better sooner than you think. You're a good man Kevin and you deserve a woman who will love you and bear kids for you and....."

"Do you really think it's all about bearing kids? I don't believe you, Stella. You don't know what you mean to me. Kids are important, yes I agree but being with the one who makes you happy is more important."

"Let me tell you something you don't know. You've always said you admired my parents because of the love between them. What if I told you that my mother never really had kids of her own?" Kevin said as he corked his head giving her a surprised look.

"What exactly are you talking about? You're not making sense Kevin," Stella exclaimed with a mixture of confusion and curiosity on her face.

"My parents are not really who you think they are. My biological father passed on few months before I was born and my biological mother joined him few hours after my birth," Kevin said as a matter-of-fact with a slight smile on his face.

"Come let's sit down before you start feeling dizzy," Kevin said as he led her to a chair in the sitting room after locking the entrance door.

"I'm fine just having a little difficulty digesting what you just said. Are you saying that....?" Stella couldn't finish her question as Kevin cut in.

"Yes, Mr and Mrs Chukwudi Ofor are not my biological parents. Mrs Chukwudi is my mum's sister who couldn't conceive due to unexplained medical reasons, so she and her husband adopted me immediately my mum passed on and they have been the only parents I know."

"Hold on!  But you bear their name, Kevin Chukwudi. How? I don't get it." Stella was perplexed.

"Baby, you're the first person I'm telling this and that's because I love you too much to let you go. I'm not leaving you for any reason."

"No buts baby," Kevin said as he held her two hands. "Please marry me. Just say yes. We'll have kids someday, somehow if God wills. I can't live my life without you, Stella Uzoigwe."

"Oh, Kevin!" She couldn't contain the joy she felt as she jumped into his arms, "Yes! Yes! Yes! I will marry you, Kevin Chukwudi."

Without wasting time he slipped the engagement ring he'd been carrying in his pocket into her third finger.

They embraced each other and it seemed like time should stand still for eternity as the two lovebirds kissed with so much passion. The timing was perfect as joy filled their hearts.

Stella looked into his eyes, "Sweet, how did you know to come to my house? I thought you were waiting at the Golden Garden?"

"I was at your door when I sent the message. After the stunt you pulled during our last date? I knew
you won't come so I had to take the bold step myself," Kevin replied as they both burst into laughter.