I was almost through with my National Youth Service when I met him. He is a medical doctor, practicing privately and a renowned politician in the state where I served.

I had just been recruited to participate in the voter's card registration process going on then against the upcoming 2011 general election and I was posted to his ward.

As a beautiful woman, I sensed that he liked me not only because he tried as much as possible to make my job comfortable and enjoyable, but there were some other preferential treatments I observed that he showed me which my colleagues did not really enjoy in their various wards.

He made it a duty to always buy me lunch and give me transport fare irrespective of what we were being paid by the Federal Government.

Some of my colleagues noticed it at some point and thought that he was just doing it as a politician who was doing everything possible to win the heart of the people around.

After my Youth Service, I got a job with an insurance company and he didn't waste time to patronize me as we were still in touch.

My marriage was quite young then and I had a 3-year-old daughter though this wasn't obvious because I really look young and beautiful. Then he offered me the opportunity of getting the government job I'd always wanted and my hubby encouraged me to grab it with both hands because it was a convenient job that would pay well.

I was very excited and I submitted my CV and application letter as advised. I was to be his Personal Secretary. Before the job process went through, he had on several occasions invited me to lunch and I went with my Hubby's consent and approval.

Yes I am beautiful and I know there are lots of men out there looking for young ladies to grab, I can also tell when the opposite sex is attracted to me. I'm old enough to know the difference between 'like' and 'lust'.

But I am also a godly woman and I will not want to do anything that my God will be ashamed of.

On the day I was to pick my appointment letter, I got to his office and he hugged me in an unusual way, saying he just wanted to congratulate me on getting the job. 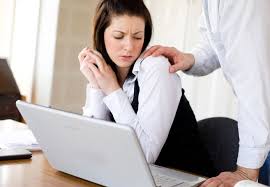 Then he expressed how much he loved me and wanted to have a taste of me but has been holding himself all these while waiting for the appointed time.

I didn't need my ancestors to tell me that I was in for it. I acted shocked, though I really wasn't surprised because I've always known that men can be funny.

It was against the law of God and therefore wasn't right. I reminded him that he was a minister of God in the church.

I reminded him that he was old enough to be my father but he said, "Age is just a number, God knows that I genuinely love you, besides we don't know what our spouses do behind us."

I was speechless because it was obvious he had already rehearsed his lines way before my arrival.

I told him I couldn't do what he wanted me to do and he said I was being childish and I should just think of all I would benefit from my relationship with him.

He promised me many things which I knew my husband couldn't give me at the moment and he assured me that it would be our little secret.

He started coming towards me and made several attempts to grab my breast. I jumped up and told him I wasn't comfortable and would like to go home.

He said it was okay and there was no need to rush things up.

In his words, "Now that you're my Secretary you can't escape me again. Next time I must chop you raw!"

I smiled and took the appointment letter from him knowing what was at stake.

On my way home I tore the letter and cried all through the rest of the day. When my husband returned from work, I told him that I didn't get the job.

He didn't understand how I missed such robust opportunity but I knew better.

Do you think I did the right thing?