This one is a very common experience anyway, I'm sure almost every graduate may have gone through something similar. So I went for this interview which was supposed to start by 9am and as

God would have I arrived as early as 8.30am and met some people already seated in a room. Three hours later nothing happened and some people left. I guess they had other appointments or more important things to do. I'm yet to understand why companies do that!

Around noon the first person was taken to the reception, that means she had passed the waiting test and was qualified to enter the main building not that they wanted to start her own interview sha.😝😛😝😛

Did I mention that there were 2 powerful split units sitting with us and chilling us in that small room. Me I was just forming as if I'm used to Air-Conditioner, I dinor wan to fall my hand.

Before I could say "Jack Robinson" one lady brought out her phone to receive call and left the room. Not up to 40 seconds later about 4 other candidates stepped out too in the name of receiving call. 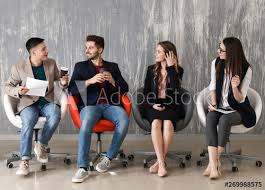 As I noticed we were just 3 in the room, I took permission from the others to temporarily turn of the AC and they happily told me to go ahead that was when I realized that all of us are local and bush people forming Eskimos!🤣🤣🤣

Oh my God! Who did this to us? Izit by force to enjoy AC to the detriment of ya life?

Why not open ya dirty mouth and say you are cold? Let forming nor kee somebori one day o.

Please people of God if you need epp don't allow leprosy of the mouth to stop from asking instead of forming for ya ancestors.

When I entered the room in the morning I already saw the handwriting of my village people on the wall and I knew they had gone ahead of me to the venue of the interview, but guess what? God pass them! They cannor succeed.

Madam "call-answerer" came inside smiling when she noticed the AC off and confessed that she only pretended to receive call so she can go outside because she was about to die of cold.

Then one guy na started asking for tissue that he wants to pupu! Funke!!!😫

Who does that? Abeg which kind interview I come sef? Although I was pressed but I don't use the restroom anyhow once I'm in the public of igwemmadu unless its an emergency like labour pains and my baby's head is out.😝 I'm a mature someone. Lolz.

Anyway, I got the job eventuarry! Praise God!