This was the second time I was meeting her this week and I’m very sure she was avoiding me. I ran the little distance between us before she could board the bike she had just halted.

“Chioma, hold on! Chioma wait!” I called out as she climbed the bike.

“Good evening Chibaby I know you didn’t see me. How are you and school wahala?” I asked in my usual concerned way.

"Ma we are trying oh. The stress has not reduced especially now that exams are around the corner,” she replied as she tapped the bike man. “Please ma I’m in a hurry, we’ll talk some other time. Bike oya!” and she zoomed off before I could say…

“I hope we’ll see this weekend!”

I don’t know why I was so desperate to have that conversation with her. God knows that I care about this girl so much even though she sees me as a pest and threat to her social life.

I’ve known the Igweoma family for a very long time and we have grown to be more than just neighbours and friends that’s why I cannot see the first child of that home go astray.

Chioma no doubt was a well-trained child but I was concerned about this new relationship she was having with that Tunde of a guy.

The little I know about him was enough to write him off. I am very sure I’ve seen him in questionable places and in compromising situations with several girls. I will not allow Chioma to fall for such an irresponsible person. I’ve made up my mind to do something about it. 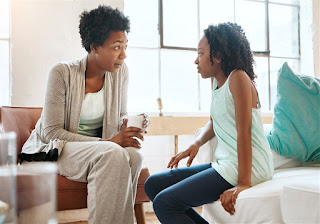 I had made several attempts to get Chioma’s attention but two weeks ago, our meeting was like a miracle. The thoughts of the outcome of our discussion still give me goosebumps as I recall how she confided in me yesterday.

She came to my house that evening in tears, banging at my door.

“Aunty Faith you warned me ohhhhh! I wish I knew better,” Chioma cried out with loud sobs as I opened the door to let her in.

“Chibaby what is the matter? How did it go? I hope he didn’t hurt?” I asked as I pulled her in and hugged her in a bid to calm her down.

“Oh, dear! That is so irresponsible of him. Now you understand why I'd been telling you to forget about him”

“I am definitely wiser now. I know better. After all the promises. He just wanted to have sex with me. I meant nothing to him.” Chioma broke down in tears again.

“My dear, don’t let this get you worked up. You have to forget about him. That means if you were really pregnant this is how he would have treated you.” I said bluntly.

“At first he didn’t even accept that he was responsible for the pregnancy. He said we only did it once and I am not supposed to get pregnant unless I was having an affair with someone else. After I insisted that he is the only one he said he is not ready to be a father and would advise I get rid of the pregnancy,” Chioma stated.

“And what did you say to him?” I queried.

“I told him I am not ready to risk my life through abortion and I wanted to keep the pregnancy. He said if I do that I should forget about him. That was when I asked him if he is removing himself from the life of our unborn child and he blatantly said yes”

“I pretended to be in tears then I told him to sign the papers that he will never come in the future to claim the child. I thought that will even touch his heart but before I could blink, he brought out a pen and signed.”

Her narration played out exactly as I suspected so I wasn’t surprised.
Now I was sure that Tunde the player was out of her life for good and she was going to face her studies.

“Chibaby,” I said as I held her hands, “Forget about what has happened in your past, nobody is above mistake. What lies ahead is more important and for now, your studies should be your priority. Focus on that and graduate with good grades. I know that someday you will make your parents proud.”

“Thank you very much, Aunty Faith. I really do appreciate you.” Chioma said as she hugged me.

“You’re welcome dear, you know you can count on me anytime,” I said as I winked at her.