SAVED BY THE CALL

I had just gained admission into the University and was still very excited about it especially on this day which was my matriculation day. My Aunt who was a senior lecturer lived in the staff quarters with her family.

Due to the fact that some of my cousins where also matriculating same day and some of our relatives had come for the ceremony, some of us were to spend the night in my Aunt's BQ behind the house.

Around midnight my sister Chisom, my cousin Aunty Onyinye (as we fondly called her) and I were already asleep when a knock at the door startled us.

Aunty Onyinye asked us to keep quiet while she went towards the door to find out who it was at such unholy hour. A male voice responded saying that he was stranded and would want to spend the night with us.

We were surprised especially me who had been hearing a lot of weird stories about life on campus.
My cousin started discussing with the guy. Who does that? She explained to him that we were all females and couldn't let him in.

The guy persisted and this got my cousin pissed, by this time we noticed there was more than one guy as we'd peeped from the door hole. The light outside was on but the light in the room was off so we could see them but they couldn't see us.

The next thing I saw Aunty Onyinye plugging a boiling ring. To my greatest surprise, she brought out a kitchen knife, forks, pepper and plugged an electric pressing iron! Funke!!!

I asked her in a whisper, "Aunty Onyinye what are you doing?" She replied, "In case these guys decide to break down the door, we will have self-defence!" Jesus is Lord!!! 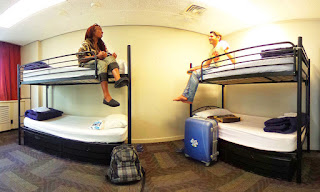 My cousin's response scared me because I'd never had an encounter with thieves or robbers. My sister and I began to pray all kinds of prayers as we were afraid that these guys may rob, beat or even rape us since we were all girls.

Meanwhile Aunty Onyinye the Lioness was patiently waiting for them to break the door so she would display her hidden agenda.

Chisom decided to place a call for help to my cousins in the main house but Aunty Onyinye said we should not 'disturb their sleep' since she was sure she could handle the situation.

One of the guys begged my cousin to please give him water that he was thirsty, she encouraged him to help himself from the Jerry can outside but he insisted he wanted the one inside. At this point,

Aunty asked us to choose our weapon!

Chisom couldn't take it anymore and snatched her phone from Aunty Onyinye (she previously seized the phone) and dialled one of my cousin's number. He was rejecting the call thinking it was the usual flashing game.

Finally, she hid her caller ID and dialled his number before he picked! We informed him of the situation at hand and a few minutes later all my male cousins (about 6 of them) came running from the main house with various tools, matchets, knives, stones and sticks.

Their shouts alone scared the stranded water-drinkers as they ran for their lives thinking it was the school security men! Lolz.

After they left we opened the door for my cousins and without wasting time I was already with my pillow and wrapper to join them back to the main house as I said a prayer of thanks to God.