WHEN YOUR WORD COUNTS!

I didn't expect to be late for work on this very day our Director had emphasized on the need to arrive work early. I had done every single thing possible to get to the office before 8am which was the official resumption time.

Sincerely I felt a bit disappointed in myself when I looked at my watch that morning and it showed 7:45 while I was still about 35 minutes away from the office.

I would have just boarded a motorcycle to make the rest of my trip faster and help me beat this terrible traffic but the rain was seriously pouring and there was no way I could make it as early as I wanted.

To say I felt helpless was an understatement but I just tried to keep my mind positive as I thought of a way out of my situation.

I decided to take the risk and send Mr. Ayobami a text informing him of my situation after several calls to his line didn't go through.

I didn't need a soothsayer to tell me that I was in for some serious scolding when the message I sent wasn't delivered.

I braced up to face the consequences of my lateness.

On getting to the office I noticed from the signing in record book that most of my colleagues were able to make it in before the rain. Well, maybe luck wasn't on my side today.

Our meeting with the Director commenced by 9:30am and he made it known that he was very disappointed in some particular members of staff.

I knew he was referring to me because I arrived by 8:27am.

Mr. Ayobami asked that all those who made it before 8am should stand up so their efforts could be acknowledged.

Five of the seven administrative staff were on their feet smiling from ear to ear which left Madam Joy and me.

Though Madam Joy was granted permission to take her son for immunization so I knew that the shame of the day belonged to me alone. 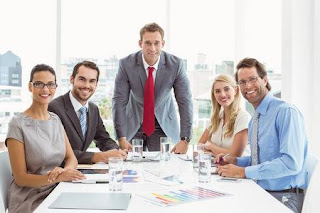 Then Mr. Ayobami addressed us, "You are all aware that the contract we have with Johnson & Sons kicks of today and I needed to pick a project supervisor to work on it. This automatically comes with a promotion and salary raise.
I arrived at the office by 7:16 this morning because I wanted to sort out some things and the rain started around 7:30 so I knew that staff members may come in late. I drove out around 8:10 when I noticed that no one had arrived only for me to return and see that almost all staff members sign-in time was between 7:45 and 8:00 except Phillip and Joy."

At this point, all my colleagues standing bowed their heads in shame as the truth stared them in the face.

I smiled within me grateful that I didn't let my desire for prospective promotion becloud my
judgment.


Dear Reader,
Who do you think deserves the promotion?