I really do not know what is going on between me and Henshaw but deep inside my heart I honestly feel like this marriage has hit the rocks.

I used to think that I knew him more than anyone in the world but with this his new attitude, I think he has gradually become a stranger to me.

After being with someone for almost eight years suddenly the person starts to exhibit an usual and unacceptable character.

I wish I could just take a break from this thing called marriage because I'm tired of enduring all the rubbish he brings up on a daily basis. 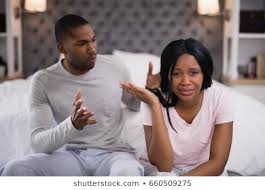 Since I resigned from my last job two months ago, he has been giving me one kind useless attitude that I don't understand. I have automatically become a housewife.

He doesn't even help me with any house chore talk more of looking out for the kids. If I ask him for money, that one is another ball game. He'll be querying me as if I have a criminal background.

What kind of man did I get involved with self? God knows I have tried everything humanly possible to be a good wife to him and a great mother to our kids but right now I think I've had enough.

That's why when I saw a comment, from an unknown number, on a picture I displayed on my WhatsApp status saying, "The beautiful Queen I couldn't have," I was curious to know who admired me this much when my so-called husband doesn't have my time.