Today was quite interesting. On my way to work, I was thinking of a hot gist to share with you all especially those who have been asking questions about my Pre-anniversary post.

While in the bus I sat next to an elderly man who should be either in his late 60s or early 70s. I don't want to mention his name so I'll just call him Papaa.

After we exchanged pleasantries, he inquired about my tribe and we found out that we are from the same state.

He went further to ask about my destination and my job which I gave him accurate answers and that was when he started unleashing his wisdom.

Papaa said he likes me and would like his brother who is a medical doctor to marry me. If I say I was surprised, then I'm lying.

The issue is that he didn't even allow me to respond before he told me that he is a psychologist and can read people's mind and unravel their secrets.

He said I was a young girl in need of a man to take care of me and I had to ask him how old he thinks I am. He responded that I am not up to 30. The kind of confidence this old man was talking with just made me decide to allow him fool himself.

Then he paused, drew closer and whispered in my ears, "You have a boyfriend right?" I nodded my head and his next statement threw me off balance.

"I know you have been having sex." I replied in the affirmative then he said, "Tell that boy to leave you alone so that you can marry a serious person!"

Wow! Such audacity! Me sef I shock o! Lolz.

Papaa, in conclusion, said I should sack my boyfriend this December so that I can start 2020 with his brother who will eventually marry me.

Please advise me. How do I give my boyfriend of 15 years quit notice? I need your help ASAP!

I have been laughing since I got to the office.

By the way, that's what I was dressed in when I met Papaa the soothsayer! 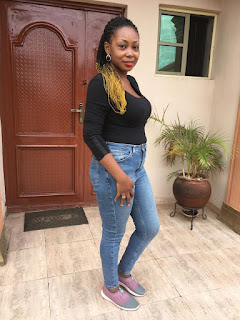