I was home with my sister Ifeyinwa that hot afternoon when we heard a knock at the gate.

As the youngest person in the house, I have automatically become the gatekeeper so I went to find out who it was.

Surprisingly I met an unfamiliar handsome young man in his early thirties whose smile could calm a raging storm.

“Good afternoon sir, how may I help you?” I asked.

“Yes. And who would you like to see?” I asked curiously as I cocked my brows.

“I would like to see one of his daughters by name Ify,” he replied.

“Oh! My elder sister? Why do you want to see her and who are you?”

Sister Ify rarely had male visitors so I was wondering who this young man was.

“Well ...” he hadn’t finished his statement when Ifeyinwa cut in, brushing me aside so she could stand face to face with him.

“Oh I see, I assume you are Ify. My name is George, from the neighbouring village, a friend to Chibunna the Igwe’s son. If you don’t mind can I have a word with you in private?"

Ifeyinwa turned to me immediately giving that look I detest so much and without uttering a word, I grudgingly excused them.

I’m going to be 20 in a few months time so I wonder why they still treat me like a baby.

By the way, why didn’t she just tell him that Sister Ify isn’t around and would be home by evening?

Anyway, I think I should mind my business for now. 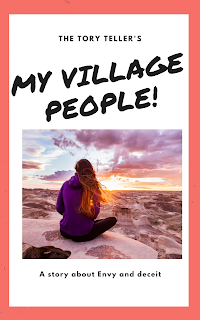 To my astonishment Ifeyinwa never told Sister Ify about her visitor.

I just observed that recently she had been going out more often and spent more time on her phone.

I was already suspecting something but didn’t want to say anything yet.

Sister Ify asked if anyone had come to look for her during the week and to my surprise, Ifeyinwa said no.

I think she is hiding something and whatever she was up to I will not support her.

I wish I knew her reason for doing that though.

Chibunna the Igwe’s son had always been very friendly with us and we even became closer during my father’s burial most especially because of the way my kinsmen treated us.

It was only him and his family that stood up for us throughout that period.

I know he and Sister Ify were fond of each other though they always tell us that they are just friends.

They think I am a baby and won't understand whats going on but they are very wrong.