One evening while I was helping my mum prepare dinner in the kitchen, I narrated the incident to her and she was very unhappy about Ifeyinwa’s action.

I begged her not to confront her or let her know that I had told her about it and she agreed.

Though she said she would definitely get to the bottom of everything.

Little did I know that my mum had her own plans.

A few days later, mum announced to us that we would be having visitors over the weekend and refused to disclose the identity of the guests.

Everyone was up and doing to keep the house in order for our guests.

Finally, Saturday came and around noon, we heard a knock at the gate.

Mum insisted that Sister Ify gets it, which was very unusual, while the rest of us waited in the sitting room.

The outburst of laughter we heard from the corridor made us all turn our eyes towards the entrance door.

Sister Ify walked in with George and Chibunna all laughing like old friends who had just reunited.

Mum’s loud clearing of throat suddenly brought silence as we all exchanged greetings and the guests took their seat.

Then she said, “Chibunna and George you’re welcome to our home. Looks like George has already met my first daughter, Ifeoma,” she said smiling as she gestured toward Sister Ify.

I quickly stole a glance at Ifeyinwa and noticed she looked very uncomfortable.

Then George replied, “Thank you ma for the invitation. I was surprised when she opened the gate for us. This is actually our second meeting. I met her at the community bank some weeks ago and she was very helpful. When I asked for her name and contact she insisted that I’ll only get it when next we meet.”

“Wow! Interesting indeed. Any way you can get her contact before you leave. I don’t think you have met my other daughters. Let me introduce them. This is Ifeyinwa, we usually call her Ife and this is Ifunanya, popularly called baby as the last born,” Mum finished as she pointed us out to the visitor.

It looked like the ground should open for Ifeyinwa to just jump in because she had obviously been subtly disgraced.

I smiled within me as my mum gave me a wink.

Obviously, she was the one who invited them. 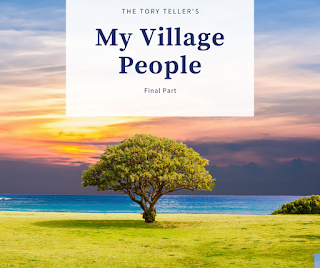 I later heard that Chibunna was the one who directed George to come and ask Sister Ify out and after meeting the wrong Ify being Ifeyinwa, he told Chibunna he didn’t like her. But was later attracted to Sister Ify when he met her at the community bank where she works.

Anyway, Ifeyinwa has apologized to Sister Ify, George, and of course Chibunna.

All these happened a few months ago and I am so happy that George and Sister Ify are finally getting married.

He has already made arrangements for us to relocate from the village and has gotten us an apartment in Lagos where he resides.

Sister Ify has applied to the bank for transfer to a branch in Lagos.

Uncle Okwudiri is very upset about our relocation and has refused to give his blessings to Sister Ify's marriage.

Chibunna told his father the Igwe and he has agreed to stand in as the father of the bride.

I am so excited about going to Lagos because this time around, my village people have failed.