I had just received a letter from my son school informing me of their Cultural Day and I was still considering what attire he would use for it when suddenly a thought flashed in my head.

Since parents were invited for the event scheduled to take place next week, maybe this is best opportunity to finally get my husband to follow me to Bubu's school, after all he had only been there once and didn't even get to meet any teacher.

Everything about Bubu's school had been my decision and although my husband was in full support and always provided the financial backing, work never allowed him to be a part of their school event.
I wonder what will happen when we eventually have more kids, does it mean that I will be the only one to handle this? I know my husband is very shy and doesn't really like meeting people as a matter of fact he has a phobia for crowd.
I know how much I troubled him before he joined me to visit the hospital before our son was born. We had been married for almost three years then and there was no child to show for it. Though my in-laws were quite understanding knowing that I had married my husband as a virgin gave me confidence that nothing was wrong with me.
My husband on the other hand kept insisting that nothing was wrong with him and there was no need to panic or go for any medical check up because according to him, I was being careful for nothing.
Anyway, after the doctor confirmed that nothing was wrong with me, Heaven finally smiled on us and by giving us our first fruit Chukwuebuka Victor a few months before our fourth wedding anniversary.
I just wish that miracle could repeat itself right now seeing that Bubu is almost 6 years old and we are not getting younger either. I wouldn't want the age difference between him and his siblings to be too much so that they could all grow up together.
***                                           ***                           ***                                 ***
It was Cultural Day at the Learningfeild Montessori School and everyone arrived in their colourful attires depicting various tribes and culture of the nation.
I had to get permission from my boss to be here seeing that after all the persuasion my husband was still be unable to make it. Although I understand that he had to be out of town to seek a contract for a project in Lagos.
Bubu was very elated as we sat under the canopy tagged "Anambra State", though he was yet to communicate fully in our native language, he could interact in the simple and common greetings of Igbo language. I know I had some work to do there but I was sure he was doing better than some other children.
He, like most of the other boys, was dressed in a black Isi agu top, black trousers, red cap, coral beads and a walking stick to depict the Igbo culture.
When it was time for our state presentation, a little boy of about Bubu's age took over the stage and won my heart by his presentation. 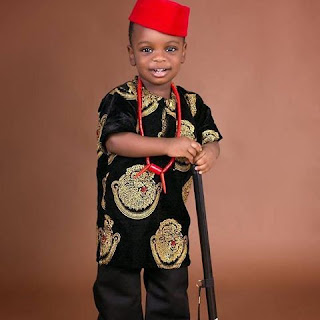 "Ndi banyi ndewo nu! Afam bu Chukwudi Junior Odoh. Abum onye Amowbia di na Njikoka n'ime Anambra State. Nni anyi bu Ji asuruasu na ofe nsala. Ndewo nu!"
(Greetings my people. My name is Chukwudi Junior Odoh. I am from Amowbia in Njikoka Local Government of Anambra State. Our food is pounded yam and white soup. I greet you all)
Everyone gave a standing ovation for the Igbo hero as we all clapped our hands. A woman from among us who was earlier using her phone to video his presentation ran to the stage and gave him a warm embrace. I suspected that was his mum.
I was really challenged that he could do that with so much confidence and fluency. I made up my mind that I would groom my son for the next cultural day. I know he is smart and can do better than that as long as he is properly trained.
I was thrilled to watch other children represent their various tribes but that little boy really got me me. I was pondering if it was because he spoke my language so well or because he was actually from my hometown or just maybe because he was bearing my husband's name.
Whatever the reason, I knew that I had to go have a word with his parents before the end of the event.
***                                ***                                     ***                              ***
So who's enjoying the story so far? Kindly share your thoughts in the comment section and if you haven't subscribed to The Tory Teller's blog do well to click the subscribe button at the top so that you can get notifications of new posts and tell someone to do same.
Continue to Part 3 here
Photo credit: Pinterest
Madailygist
© Onyinye Udeh
Email Post
Labels: New Stories