AT WHAT AGE DOES MY BODY BELONG TO ME? -Book Review

After reading Amanda Tayte-Tait's ‘At what age does my body belong to me?’, I unapologetically believe Amanda is a Shero, though, without a cape, she has bared it all by breaking the culture of silence which is one of our features as Africans. We are so fond of keeping silent especially in the face of wrong. 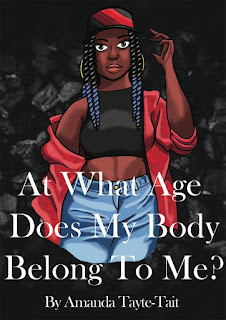 In her book, she shares her story of abuse, pain, rejection, denial, betrayal, mental health, and even suicide. Every single one of those things that we are not allowed to speak about. As children, we are told to hush and be quiet when someone, especially a close family member, touches us inappropriately, or does something unacceptable to us. According to statistics, 1 out of every 3 female has been abused but nobody wants to talk about it.

The question always hovering in the air is, ‘what would people say when they hear this?’ and unfortunately such an infuriating question has permitted many to live in pain, rejection, and in most cases facilitated the continuation of abuse and in extreme cases led to the loss of life.

Amanda graciously holds your hands and walks with you through a road she has gone down before, beginning with a suicide note she had written when she was fed up with life and didn’t see any reason to live on. A part of the book that got me as mad as a hatter was when she was taken to the police station for interrogation after she had opened up about being abused. She was asked how she felt about ruining the life of the abuser! In other words, nobody cared about her own life being ruined! 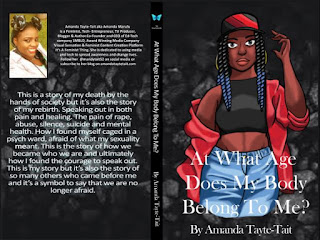 Amanda categorically states that such is no longer acceptable and elucidates on why there should be a break from this norm. As I read through the pages of the book, I am overwhelmed with a variety of emotions. I cried, smiled, got upset, scratched my head, frowned my brow, and smiled again as I could see Amanda stand confidently with her chest raised high enough for the African patriarchs and misogynists to see as she screamed, Enough!

Some of the vices thoroughly dissected in this book include domestic violence, all forms of abuse, silence in the face of wrong, injustice, rape, misogyny, gender discrimination, stigmatization, to mention but a few.

‘At what age does my body belong to me?’ is a question that every female African unconsciously ponders as she goes about her affairs and progresses in life. Such is the situation because, from birth, her life has already been planned for her and she has been raised to walk in line with these plans whether she likes it or not.

In all sincerity, I couldn’t be prouder of the boldness of a young African woman who is determined to change the course of things. I must confess this book is a must-read for everyone, young or old, male or female because embedded therein lies a tale full of lessons for the upcoming generation. Anyone who clamors for a transformation and a reorientation of the mentality of silence should read this book.

The author Amanda tayte-tait is a Zimbabwean TV producer, Blogger, Entrepreneur, and feminist.

You can get a copy of the e-book here or let me know in the comment section.

Dear Tory Lovers, I recommend this book to y'all.